In our beloved hobby of marine aquariology it is also called the coral of neophytes, because it is easy to manage and is usually one of the first to be inserted in our tanks and which must never be missing because in my opinion it is a beautiful coral.
But we must immediately say that it is not entirely true, also because like other corals it is soft Lps or Sps, even Euphyllia needs its precautions.
The skeletons of these animals, when dissected, appear in coral form and thin gills but at the same time very massive and resistant. In fact they are called Lps hard corals or stone coral.
The Euphyllies, however, are also chosen for their variety that is available both for colors and types, I'm going to list those I know.
Euphyllia Anchor, Euphyllia Parancora or also called Hammer (for their hammer shape or anchor), between the anchor and the parancora there is a difference due to the development of the skeleton, they have a specific name that you will find further down.
Euphyllia Ancora has a unique skeleton development, while Euphyllia Parancora has a calyx skeleton development.
Euphyllia Glabrescens or Torch Coral
because of the long and threadlike tentacles with a movement called “flame or torch” with the final tips of different colors, also in these there are a great variety of colors, the skeleton is in chalices.
Euphyllia glabrescens has medium-sized polyps and tentacles similar to those of anemones, also for this reason our rompers often go in symbiosis with them. Most polyps are brown or green in color, but may also be blue or reddish in color and with iridescent tips.
Its “scavengers” tentacles are thinner in diameter than the normal ones and can expand them up to 15/20 centimeters in length, “Urticating” nearby animals.
<<<<< >>>>.
It goes without saying that this is true for all Euphyllies

. Euphyllia Paradivisa
Colonies are often large in size. Polyps are long and floating, flesh-colored or green with white, green, purple or pink ends, usually completely everted during the day and partially at night.
It is often confused with Euphyllia Divisa. The subtle difference between the two species lies in the morphology of the coral, while the Euphyllia divisa has a morphology of the coral with the so-called ** facellato corallites (corallites close to each other, but not in contact).
The Euphyllia Paradivisa has a branched skeleton with * corallites *** fabello-meandroid (i.e. with the corallites attached but distinct) (with goblets), the natural habitat of the Euphyllia Paradivisa is the superficial part of the reef, so it can be insert in the upper part. But be careful since it has a nice growth it could remove light from animals inserted under it.
Euphyllia Divisa like the Paradivisa, they are in a bit delicate as a management therefore not adequate for the management by neophytes.
I named them last because unlike the others they need a little more experience to breed them, feeding these corals weekly and more often can greatly encourage their growth in the aquarium.
If the light is good and favorable and the movement pumps are directed adequately, it will favor its enlargement of the polyps and its growth, which can usually reach and exceed thirty centimeters in diameter.
It is recognized by their tree branching by the soft tissue with final tips called button always of a different color from the tentacle, to understand the difference between Euphyllia Divisa and Paradivisa, and to distinguish them, one must look at the skeleton, being almost identical in shape, it takes an experienced and well trained eye. * corallites -----> means stone coral, practically hard skeleton.
** facelloid ----> corallites close together, but not in contact. (chalices). (group 1)
*** fabello-meandroide -----> corallites attached but distinct. (group 2)

Euphyllies are divided into 2 groups.
The species Euphyllia Glabrescens, Euphyllia Yaeyamensis, Euphyllia Cristata, Euphyllia Divisa and Euphyllia Parancora belong to group 1, The species Euphyllia Ancora, Euphyllia Paradivisa belong to group 2.
Location and feeding
Their placement is recommended in a medium-low area with not direct and moderate movement, adequate light but not strong, we leave full light to more demanding animals.
The movement is very important for their ejection, and therefore for the health of the animal, too much movement can lead to the folding of the tissue which, by touching the lamellae skeleton, can injure the animal, leading it to closure and necrosis of the tissue thus creating some jelly-like filaments of brown color called "Brown Jelly", arrived at this condition the animal dies, the only thing you can try to do is try to cut the dead part and hope .....
The Euphyllies derive their nourishment mainly through photosynthesis, which is performed by the zooxanthellae, which live in symbiosis within them, therefore they feed on microorganisms present in the water, being scavengers they do not disdain powders or feeds destined for other corals such as for Sps or Lps.
Values in Aquarius
For the Euphyllie in general, even if they are considered strong, they do not like sudden changes of Kh and Ph .... Po4 and No3 high ... too high temperature above 26 ° ideal parameters:
temperature between 23 ° / 26 °
salinity 1023/1025
Kh between 7/10
Ca 420/450
Mg 1280/1350
Ph between 8.1 / 8.4
Po4 0.01 / 0.03
No3 in 1/3 (Nyos test)
I hope I have been of help especially to the Newbies of the group who want to want to insert this beautiful coral. A warm hug and Happy Reef to all. 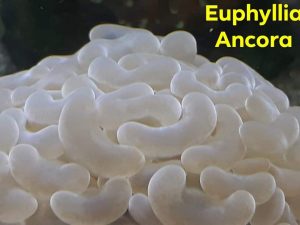 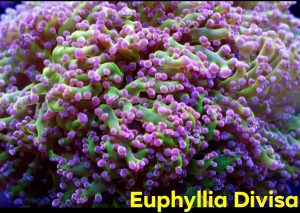 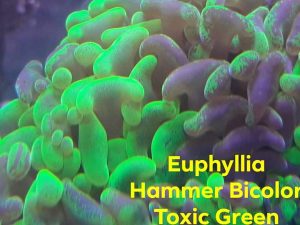 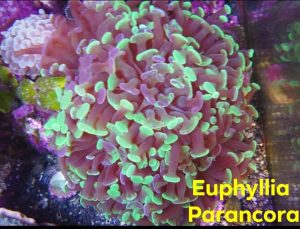 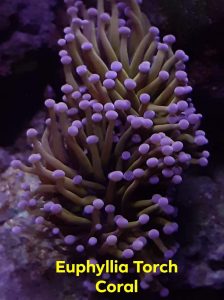 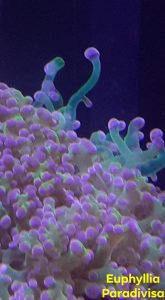 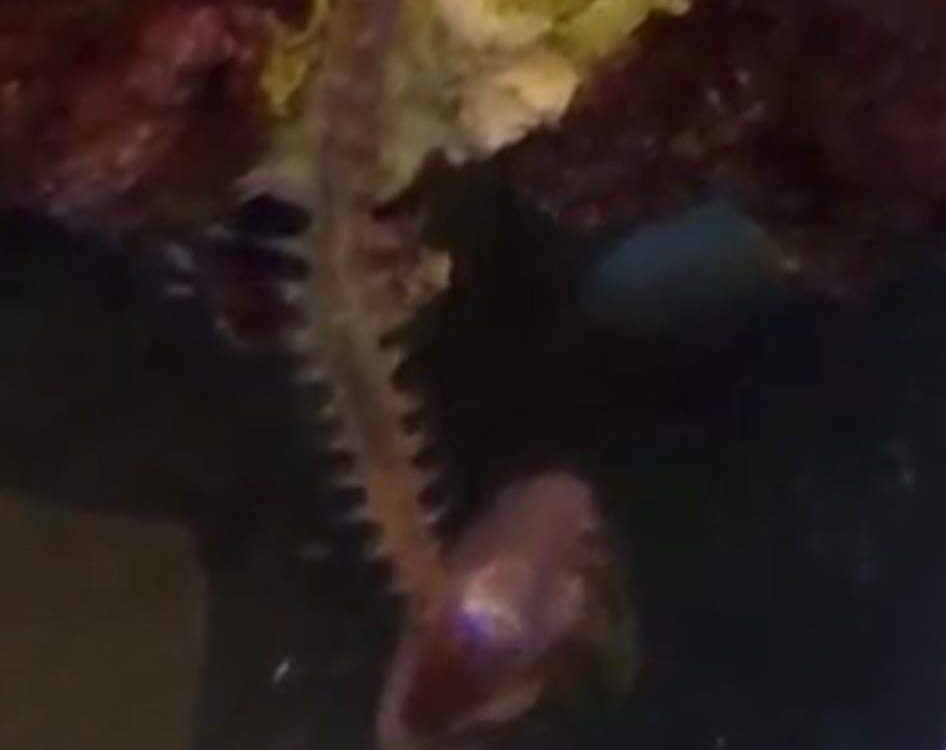 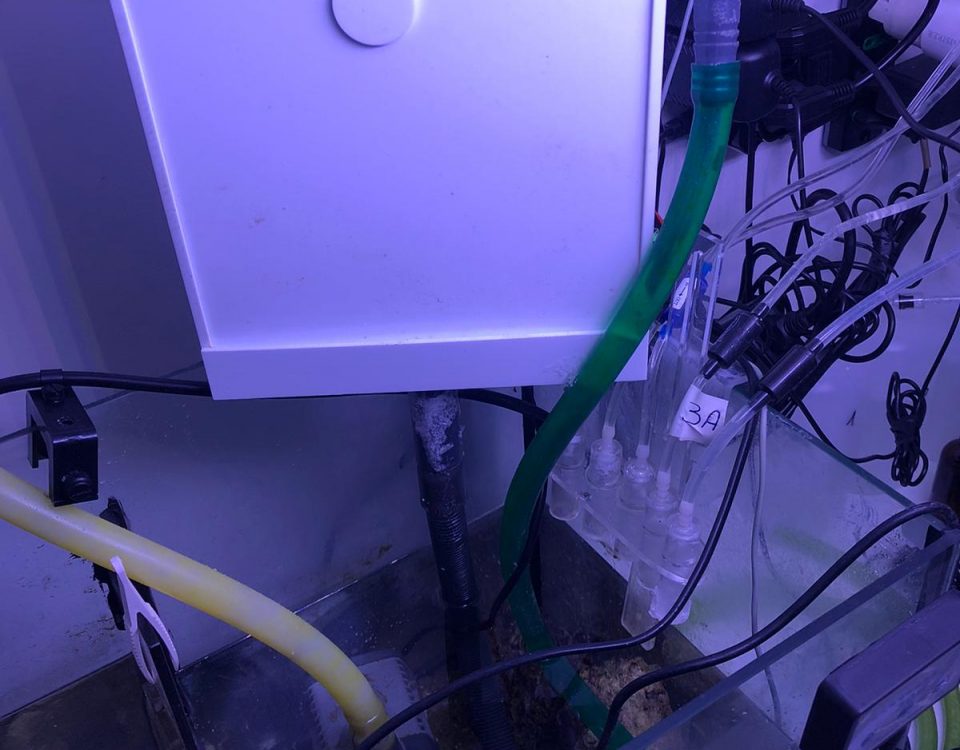